What Ted and Josh Kuntz Taught Me

This is a story from the new book by Al Etmanski, The Power of Disability:10 Lessons for Surviving, Thriving, and Changing the World. 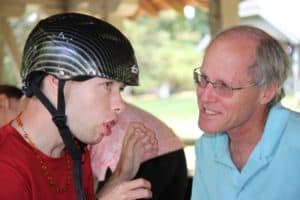 Diversity strengthens our social immune system. It is key to creating more resilient and caring communities. This is why Jeff, one of two teachers who were dividing seventy students into two grade seven classes with the toss of a coin, picked Josh Kuntz. “I don’t understand,” said Mike, the other teacher. “Why would you choose a child with severe disabilities as your first pick?”

“Well,” said Jeff, “I think having Josh in my class will make it a kinder and gentler place for everyone. I’ve been around the school for a number of years, and I noticed how the other children responded to Josh. I noticed they were eager to greet him when they passed him in the hallways. I noticed children modifying games to include him and comforting him after a seizure.”

Josh was Ted Kuntz’s son, the former Board Chair of Plan Institute, and a long-time member of PLAN. The story of the two teachers dividing seventy students into two grade-seven classes with the toss of a coin is the centerpiece of Ted’s book Peace Begins With Me: An Inspirational Journey to End Suffering and Restore Joy. It’s a story I never got tired of hearing as Ted rehearsed in front of a few of us before hitting the road to speak about the importance of diversity. When Josh was a baby he developed an uncontrolled seizure disorder. It affected his intellectual development and his language. Josh could speak some words with difficulty, but few people could understand them. That didn’t matter to Ted and his wife, Cathy Anthony: they requested, indeed insisted, that Josh attend the same neighborhood school as his sister.

And it didn’t matter to Jeff, the teacher who chose Josh because he understood the multiple benefits of inclusion. He knew Josh would benefit from being in a regular classroom. He also knew Josh would enrich the learning environment for his classmates, make the school a better school, and make him a better teacher. Jeff once told Ted that he believed Josh’s ultimate contribution was teaching his classmates how to become caring citizens. Ted’s corporate clients wanted those kinds of benefits too. They wanted to do something more than follow diversity guidelines. They wanted to create a welcoming environment for all their employees, and they believed there was no better way to get started than by inviting Ted to tell Josh’s story.

The expressions “Don’t put all your eggs in one basket” and “Variety is the spice of life” are reminders that diversity has been a source of strength and renewal through the ages. Nowadays the rhetoric about diversity is everywhere. Diverse viewpoints give us a competitive edge. They stimulate new ways of thinking. They help break logjams. They can lead to breakthroughs. These are true. But only if everyone is included, not just a select few, and if they are welcomed wholeheartedly the way Jeff welcomed Josh. There is still hard work to be done if we are to fully benefit from diversity. Too many people continue to be excluded economically and socially.

The people I’ve chosen to include in my book The Power of Disability know how to make diversity stick so that it benefits both the individuals being included and the wider society. They teach us that you can’t be a little bit pregnant or a little bit diverse. One is a pioneer in the corporate field of diversity. Another is refreshing a seven-hundred-year-old tradition of inclusion that is becoming a model of health care and social care reform. Some are demonstrating the benefits of catering to people with disabilities as customers and employees. Others are transforming the fields of fashion, dance, and entertainment.

The Power of Disability is available in bookstores and online. Click here for purchasing options.