The R-word takes away people’s humanity. We all need to stop using it Social Sharing 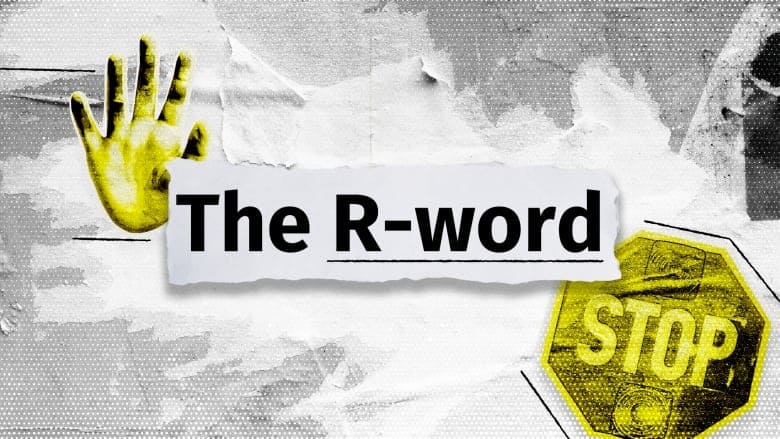 This is an opinion column by Al Etmanski, who is the author of The Power of Disability and recently co-chaired the federal COVID-19 Disability Advisory Group. For more information about CBC’s Opinion section, please see the FAQ.

Some of you may have heard it on the playground. Others might have used it in jest. I’m not going to write it. I’m just going to call it the R-word because it’s that disgusting.

It’s a slur against people with intellectual disabilities that you will see peppered in many news stories.

NFL player Janoris Jenkins was cut from the New York Giants for using the word; Khloé Kardashian promised to “do better” after she was called out on social media for employing the R-word in public posts; as was far-right pundit Ann Coulter, kicking off a national campaign in protest.

Locally, a school trustee in Chilliwack, B.C., recently used the R-word to describe three reporters. Many have since called for Barry Neufield’s resignation. One expected at the very least that he would apologize — but it’s been four weeks and he still hasn’t done the right thing.

Even if he does, his comments are only one instance in a phenomenon that refuses to die.

According to a Leger survey, 48 per cent of Canadians use the word or hear someone called or referred to as the R-word every week.

The word represents one of the most stubborn and persistent stigmas in history.

It strikes at the heart of the dehumanization experienced by a group of people with disabilities who have been marginalized and oppressed throughout history. This dehumanization has led to bullying and rejection and, in some cases, sterilization, incarceration and genocide.

Those like Neufeld who use the word off-handedly are likely unaware of its origin and its link to words like dumb, imbecile, idiot and moron.

I certainly was. It wasn’t until the birth of my second daughter that I realized my insensitivity and cruelty. Liz is now an artist and poet who thinks her Down syndrome makes her “radiant.” And it does.

Labels, even when well intentioned or used for humour, are loaded with judgments and assumptions. They are a lazy, short-form way of thinking. They prevent us from getting to know the person behind the label. At their most tragic, labels deny personhood, citizenship, love and life, and funding. They have the power to destroy spirits, undermine confidence, exclude and abuse.

In researching my book The Power of Disability, I found such words were categories established by medical scientists and were used by social workers, doctors, lawyers and legislators beginning in the early 1900s.

They were used to justify the mass sterilization of people with developmental disabilities, making it illegal for so called feeble-minded people to marry, and “ugliness laws” that prohibited the “unsightly” from being seen on the street.

This period of eugenics was kicked off by prominent American psychologist Henry Goddard in 1913 when he published The Kallikak Family: A Study in the Heredity of Feeble-Mindedness.

But here’s the rub: Goddard lied. He falsified data, fabricated evidence and faked research to bolster his discriminatory theories. His deceit extended to doctoring the pictures of his subject, a woman with the pseudonym Deborah Kallikak, to make her look sinister and dark.

The eugenics work of Goddard, including his phrase “the final solution,” went on to influence Adolf Hitler. The Nazis began their genocidal techniques by killing people with physical and mental disabilities. By the end of Second World War, they had exterminated an estimated 300,000 of them.

Even the well intentioned have atoning to do.

In the 1980s, I became executive director of a provincial association which used the R-word in its name. It’s now called Inclusion B.C., but it doesn’t hide the fact that we played an institutional role in spreading a word that continues to harm those we purported to love and support.

Atonement has three stages. First, stop using the R-word, for any reason, even when it is not directed at people with disabilities or wasn’t intended to hurt.

Better still, take the #NoGoodWay pledge to stop using the R-word. #NoGoodWay is a year-round leadership initiative led by young Canadians to raise awareness that the R-word is hurtful, and to eliminate its use. It’s attracted an impressive array of Canadian celebrities including figure skater Tessa Virtue, singer Serena Ryder and hockey star Hayley Wickenheiser.

Finally, become an ally. Learn about the barriers society imposes on people with disabilities, the poverty they experience, and align your actions and resources with theirs.

The controversy over Neufeld’s remarks may have disappeared from daily media but they still sting among people with disabilities.

“Why do people want to hurt us?” says my daughter, who is wise beyond her years. She and her friends know the R-word is one of those labels that prevents us from recognizing each other as fellow human beings.

Al Etmanski has received the Order of Canada and Order of British Columbia for his parent advocacy work. He is the author of The Power of Disability. He recently co-chaired the federal COVID-19 Disability Advisory Group.

**Please note that all views and opinions expressed by contributors should be recognized as theirs alone, and do not necessarily reflect the official policies or position of Plan Institute**