The Four Walls of my Freedom

Lessons I've learned from a life of caregiving. 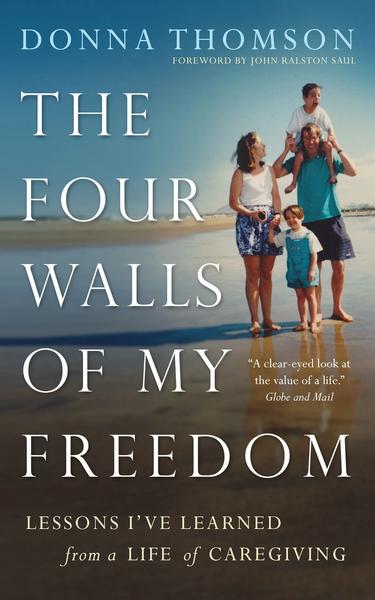 The Four Walls of My Freedom: Lessons I’ve Learned From a Life of Caregiving
By Donna Thomson, Foreward by John Ralston Saul

“A clear-eyed look at the value of a life . . . What if a life was not judged by its monetary worth or possible economic benefits to society, but as a series of complex and rewarding relationships?”
— Elizabeth Renzetti, Globe and Mail

A riveting and redemptive family memoir, The Four Walls of My Freedom is Donna Thomson’s account of raising a son with cerebral palsy and a passionate appeal to change the way we think about “the good life.”

Donna Thomson’s life was forever changed when her son Nicholas was born with cerebral palsy. A former actor, director, and teacher, Donna became his primary caregiver and embarked on a second career as a disability activist, author, and consultant.

Thomson vividly describes her experience in treading delicately through daily care, emergencies, and medical bureaucracy as she and her family cope with her son’s condition while maintaining value and dignity (for Nicholas, too). She brilliantly demonstrates the vital contribution that people with disabilities make to our society and addresses the ethics and economics of giving and receiving care — much of which she applies to eldercare and our aging society. Featuring a foreword by John Ralston Saul, and two new chapters, The Four Walls of My Freedom is a passionate appeal to change the way we think about the “good life” that will touch anyone caring for the lives of another.

Donna Thomson began her career as an actor, director, and teacher. But in 1988, when her son Nicholas was born with severe disabilities, Donna embarked on her second career as a disability activist, author, and consultant. She is married to James Wright, the former High Commissioner for Canada in the UK. Their previous postings have been in London, Washington, DC, and Moscow. Jim and Donna have two children and live in Ottawa, Canada.